Neon Exchange, or NEX, is a decentralized exchange built on the NEO platform that is designed primarily for trading NEOs NEP5 tokens. The exchange will use an off-chain matching engine to match trades through smart contracts on side-chains, reducing clogging of the main blockchain and increasing security. This will also allow for more complex trades currently not available on other DEXs, such as market and limit orders. The final feature is a Metamask type extension called NEX Wallet Extension. Today, cryptocurrencies are primarily traded on centralized exchanges where user funds are at risk to hackers and platform managers.

However, even with batched trades and the higher speed of the NEO blockchain, there is a possibility that at a certain size, it would still be too slow for ideal trading performance. This will allow immediate trading after a previous order without any delay, allowing a trader to react quickly to market conditions. NEX combines the NEO blockchain with an off-chain matching engine to enable much faster and more complex trades than existing decentralized exchanges.

NEX is a decentralized exchange that will run on the NEO blockchain (China’s public blockchain). It employs a publicly verifiable off-chain matching engine to process trades and support complex orders. NEX team are planning to introduce exchange on Ethereum later on.

Currency of ICO – NEX issued have no distinctive use (except ICO itself), but their holders will be granted a certain part of Neo Exchange platform’s income that will be formed from the transactions fees. To receive the payouts, users should participate in the ICO and stack tokens in the NEX wallet.

NEX aims to create a decentralized exchange supporting NEM-5 tokens, what is a significant step to develop NEO Smart Economy. They have already launched their Alpha which will be used in ICO for crowdfunding. According to their roadmap, NEX will have fully working product to the end of the year with cross-chain support for trading BTC, LTC, and RPX on the platform.

US Senate Considers Blockchain Usage for… 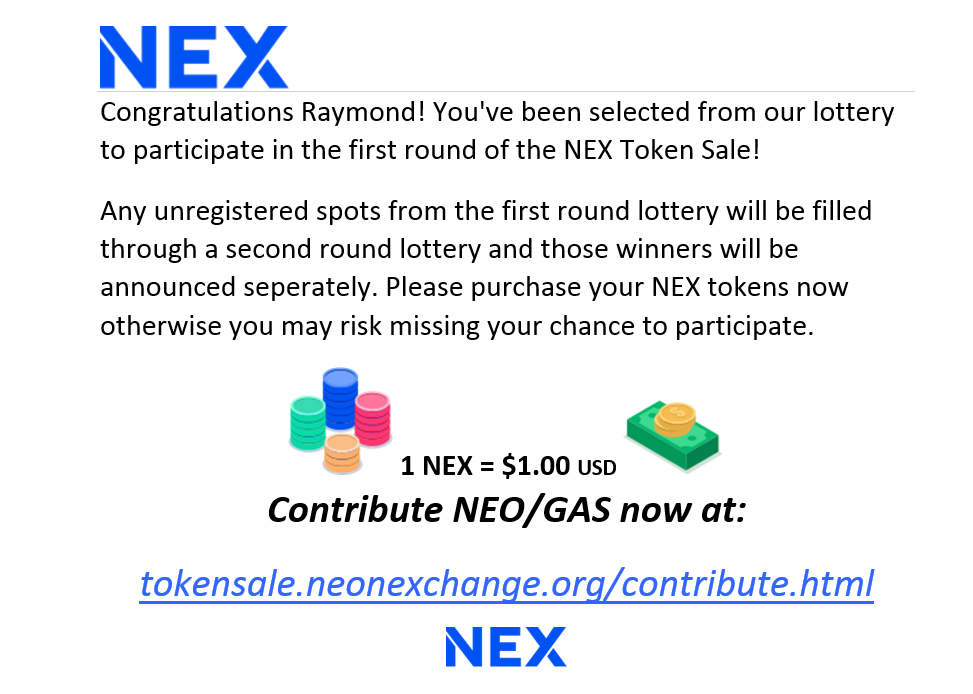 Decentralized exchanges (DEXs) allow users to retain control of their funds as trades are mediated by smart contracts on a blockchain. Unfortunately, today’s DEXs are slow, hard to use, and are restricted to trades on a single blockchain. Many people do not use DEXs because they cannot trade with their national currencies. NEX is the first DEX that will allow its clients to enter the exchange with fiat currencies such as USD, powered by a global network of licensed third parties. NEO, NEO Gas and NEX token will be utilized as base pairs to trade NEP-5 tokens on the Neon Exchange.

To successfully create an ecosystem of its own which would place NEO in a very unique place in the crypto world, is no easy feat to achieve. NEX brings a wide scope of improvement to the NEO ecosystem. A key advantage of the NEX wallet would be that the NEX users will not have to worry about transferring their NEP-5 tokens on and off the platform. With the NEX’s decentralized platform, users can buy NEP-5 tokens directly from fiat currency.

NEX tokens derive value from trading of other assets, so are likely to be classified as security tokens. This introduces regulatory complications that could make it difficult to list them on other exchanges. NEX is billed as a ‘high performance trade and payment platform’ that is built on the NEO blockchain.

Open source framework and template for interaction with NEX banking partner APIs. NEX is a combination of the NEO blockchain with an off-chain matching engine which enables much faster and more complex trades than existing decentralized exchanges.

A new feature of NEX will be the user-friendly smart wallet Chrome extension to store currencies off the exchanges while allowing instant trading at the same time. Exchange services are critical not just for users of cryptocurrencies, but also for many other applications built upon blockchain technology.

Neon Exchange is one of the pioneer ICO projects poses platform providing decentralized cryptocurrency trade. It was launched by the creators of CitiOfZeon – open source community NEO. In contrast to the majority of similar markets, it uses “chain off relay” that is not clogging up the network. Thanks to that the whole system works much quicker, while the exchange process uses the technology of decentralized data-bases and provides full protection of participants’ information.

As I’ve covered before, NEO, also known as China’s Ethereum, is a blockchain platform that facilitates the development of digital assets and smart contracts. NEO is currently ranking 14 based on market capitalization, while GAS is at 76, with a total supply of around 17 million compared to the 100 million total supply of NEO. Neon Exchange (NEX), a decentralized exchange and payment service platform is now gearing up for their token sale which is just one week away. The purchase of NEP-5 tokens directly from fiat currencies and their storage, while trading on a decentralized platform, is the vision of the Neon Exchange ICO project.

Neon Exchange is platform for complex decentralized cryptocurrency trade and payment service creation. It is based on the NEO blockchain that applies a publicly verifiable off-chain matching engine to handle trading volume and support complex orders.

In this sense, the strategy of launching the exchange to capture a particular niche of the market may well play out more toward the success of NEX in the long run. Within the crypto space, the benefits offered by decentralized exchanges (DEXs) are beginning to catch on.

Its key value proposition is that it allows both cross chain exchanges and fiat-crypto exchanges. Crucially, it intends to achieve this while also delivering the highest standard of trading performance.

Among top gainers on Tuesday and in the past week, have been NEO, and its counterpart token on the NEO blockchain, GAS. NEO continued its gains by over 7% while GAS jumped 13% by the end of the trading day. The gains could be due to the NEON Exchange ICOwhich started on September 3rd. After contributing with NEO, GAS, or both NEO and GAS combined, NEX tokens will appear in the contributor’s wallet after 1 block on the network. NEX leverages an off-chain matching engine to enable faster and more complex trades across multiple blockchains such as NEO and Ethereum.

NEX handles enormous trade volume through its unique publicly verifiable off-chain matching engine. The NEX payment service enables third-party smart contracts on NEO to send and receive global assets such as NEO and GAS as part of their computation. NEX handles complex order types that aren’t currently available on other decentralized exchanges such as market and limit orders.

Blockchain-Charged Browser Brave Explodes into the…

The exchange enables transfers across multiple blockchains such as NEO and Ethereum. Their payment service enables third-party smart contracts on NEO to send and receive global assets such as NEO and GAS as part of their computation. Launch of web extension for dApp integration with NEO blockchain and NEX exchange. Release of an open source framework for conducting such sales, including smart contracts, wallet and extension integration, KYC, and backend website.

NEX is issuing 50 million tokens to fund development and future expansion, of which 25 million will be sold to the public. NEX tokens are in the process of being registered as a security (first in Europe), and will provide holders with a share of all revenue generated by the exchange and related services. Revenue per user will be determined by the number of NEX tokens they hold and the length of time they commit to staking their tokens. The minimum fee share rate is 25%, increasing linearly to a maximum of 75% when tokens are staked for two years.

NEX envisions a vibrant ecosystem of web-based decentralized applications (dApps) running across public blockchains such as NEO, Bitcoin, and Ethereum. These applications require tools to interact with, make transactions upon, and send data across chains. To achieve this vision, NEX is developing the first cross-chain browser extension. Web applications can use this extension to collect payments for goods in any digital currency, make trades and transactions across blockchains, and interact with smart contracts across NEO and Ethereum. All of this cross-chain functionality is powered and made possible by the NEX off-chain matching engine.

Instituto de Credito Oficial
Is it legal for a blockchain based startup do ICO in India?
Refereum ICO Review
GoNetwork ICO Review – Bringing Cryptocurrency To The Masses Through Mobile
icoreview.site Competitive Analysis, Marketing Mix and Traffic