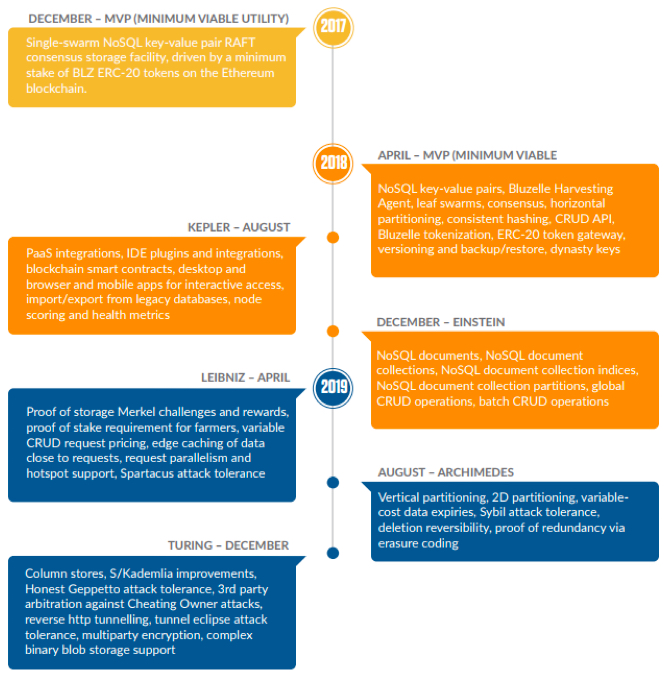 The network plans to provide scalable and reliable database services to distributed applications. Users can rent their excess storage and computing resources to application developers using the native BNT token as payment. Bluzelle hopes to connect consumers through a variety of distribution points such as AWS, Android Studio, Quorum, and Microsoft Azure.

Then, the producers guarantees the service level and provides the (consumer) requests of resources to the network. So, once at this stage, the producer puts up a proportional stake of BLZ to facilitate the process. Therefore, higher quality encourages players to create competitive services which is the very baseline for a free market-ecosystem.

The Bluzelle producer economy is referred to as a swarm of nodes (i.e. a metaswarm), and members can be reimbursed in BLZ and BNT—the two tokens facilitating the economy. To build a more robust and reliable database economy, Bluzelle collateralises tokens to ensure producers meet the computing resource standards required of a producer. Overall bluzelle is quite hard to understand with its advanced swarm technology it’s easy to get lost along the way, and definitely not beginner friendly.

The consumer in the Bluzelle ecosystem will primarily consist of dApp developers who have a need for an immutable decentralized storage platform. They will be able to access Bluzelle resources and pay for them in BLZ and BNT tokens. The BLZ token is a publicly traded ERC-20 token, while the BNT token is a private token native to the Bluzelle network. Bluzelle is a data storage blockchain, offering decentralized applications (dApps) a decentralized database solution. It is also creating a dual token economy, with an external token for investment and an internal token to power the network in a fee-free manner while also giving masternode owners an incentive to continue operating.

Producers will be rewarded with either BLZ or BNT, which are the two tokens created for the Bluzells network. Bluzelle has also taken steps to collateralize the tokens for a more reliable and robust database economy.

If we could see Bluzelle roll out some more features in the near future it could definitely move into the top hundred cryptocurrencies. The ecosystem primarily has two central players, a producer and a consumer.

The reason for having two tokens is that Ethereum and its ERC-20 tokens are too slow and expensive for real-time database accounting. The BNT internal native token exists to enable high-speed, zero-cost, and real-time database accounting, while the BLZ allows customers to easily obtain access to the Bluzelle service. Bluzelle will release more details on token economy further down the road. It will see BLZ tokens being used in the upcoming release in November. BLZ tokens will be used as payment utility as well as compensation to farmers (network nodes).

The consumer utilises the Bluzelle database network and pay for these services in BLZ and BNT tokens. The BLZ token is an ERC-20 token which is publicly tradable to individuals around the world while the BNT token (Bluzelle Native Token) is a token privy to the Bluzelle consumer network. This means the Bluzelle network bypasses the congestion restraints of the Ethereum network and also allows for greater autonomy in dictating where and how data is stored. Further, these tokens will be pegged to the same value, ensuring a mutual appreciation of the currencies and creating a heightened incentive for people to act as producers. In short, producers are essentially miners who lend computing power to the Bluzelle network, upholding the entire database of distributed information.

Subsequently, the system can reduce costs, increase their scalability and erase any pains with complex existing database integrations. This in its entirety makes Bluzelle very attractive option for the SME (small-to-medium-enterprise) segment to distribute their dApps on their network. Bluzelle is a decentralised database service for dApps (Decentralized Applications). It is for dApp developers who are dissatisfied with the costs, limited scalability, and complexity of existing database systems. Bluzelle takes blockchain principles and sharding and partitioning concepts to create an AirBnB like marketplace for data storage and management.

The project focuses on software developers and enterprise software architects in the Asia Pacific region. There are quite a few tokens like that in this week’s list, as well. There are no value picks, again, but Bluzelle, the latest entrant to the blockchain storage wars, is my momentum pick (just my opinion, not investment advice). Here are my notes on that and a few of the other tokens showing credible social momentum going into ICO this week.

New blockchain protocols for launching decentralized applications (dApps) are only just beginning to emerge and be utilized on the global market, revolutionizing the way products and services function. The scales at which dApps have the potential to operate are limited only by processing power and the speed of the protocols they are based on.

Bluzelle was recently appointed by the World Economic Forum as a Technology Pioneer for 2017, and was named to the Global FinTech 100. The strong development team in pale, and the impressive partnerships that have been quickly formed are both positive signs for the future of Bluzelle.

This helps to ensure producers will meet minimum standards for computing resources. The consumers are those who want to use Bluzelle’s database services; the developers they target.

Bluzelle – Looking to Become the Oracle of the Blockchain

The producers are those who give their computing space resources to the network in return for tokens. They also have to stake tokens to guarantee the reliability of their services. Since all Bluzelle information is encrypted nobody including the swarms can access the data without a private key. Bluzelle’s algorithm stores data in a unique network model that doesn’t depend on data centres and is able to scale databases services in an instant.

Protocols like Ethereum is are not designed to handle the demands of data storage and management, which would require enormous amounts of computing power, slow down networks and of course, increasing cost. The Bluzelle ICO may well be a game-changer when it comes to solving the issues of speed, scalability and function. The second actor in the Bluzelle ecosystem is the ‘consumer’, likely dApp developers looking to store and optimise their products by storing them on an immutable, decentralised platform.

This is a crypto-economic network of powerful producers and consumers. The development team thinks the blockchain is using edge computing or is part of edge computing. Think of Bitcoin blockchain or Ethereum, their nodes are distributed everywhere. Every time you write data, it will propagate across the whole network. Bluzelle plays a pivotal role in the blockchain infrastructure that will help grow the decentralized Internet.

Founders Pavel Bains (CEO) and Nareej Murarka (CTO) created Bluzelle in 2016 and then successfully hosted an USD 19,5million ICO in February 2018. They want to offer the market a decentralized database solution, where you can distribute decentralized applications (dApps). This is done with the notion that the future decentralized internet needs a database to be able to scale and function efficiently. Therefore, has a vision to create that database platform with a two-token economy to incentivise their PoS (Proof-of-Stake) structure. Despite being a decentralized data storage platform, Bluzelle also has other services geared towards businesses and corporations who want to use the blockchain.

There are two types of tokens in Bluzelle, the BLZ external token, and the BNT internal token. The BLZ token is an externally tradeable ERC20 token while the BNT (Bluzelle Network Token) is used to power the Bluzelle storage ecosystem. Bluzelle created this two token system as ERC20 tokens are not fast and cheap enough for real-time database accounting. Bluzelle stores tiny pieces of data on groups of nodes (swarms), eliminating any “single” point of failure, this makes bluzelle’s swarm the backbone of the platform. When a consumer stores data, it will be split up into what they call shards and stored between each swarm.

Kik ICO Showdown May Reverberate Across Crypto Industry
NEO-Based Platform Red Pulse Bans Chinese Citizens from Their ICO
Is it legal for a blockchain based startup do ICO in India?
Skyrim:Adoption
What is dock.io? The Decentralized Professional Network That Gives Data Back to Its Users